JobKeeper to continue for eligible business until March

The Jobkeeper scheme has been extended but wage subsidies have been cut and eligibility has been tightened. 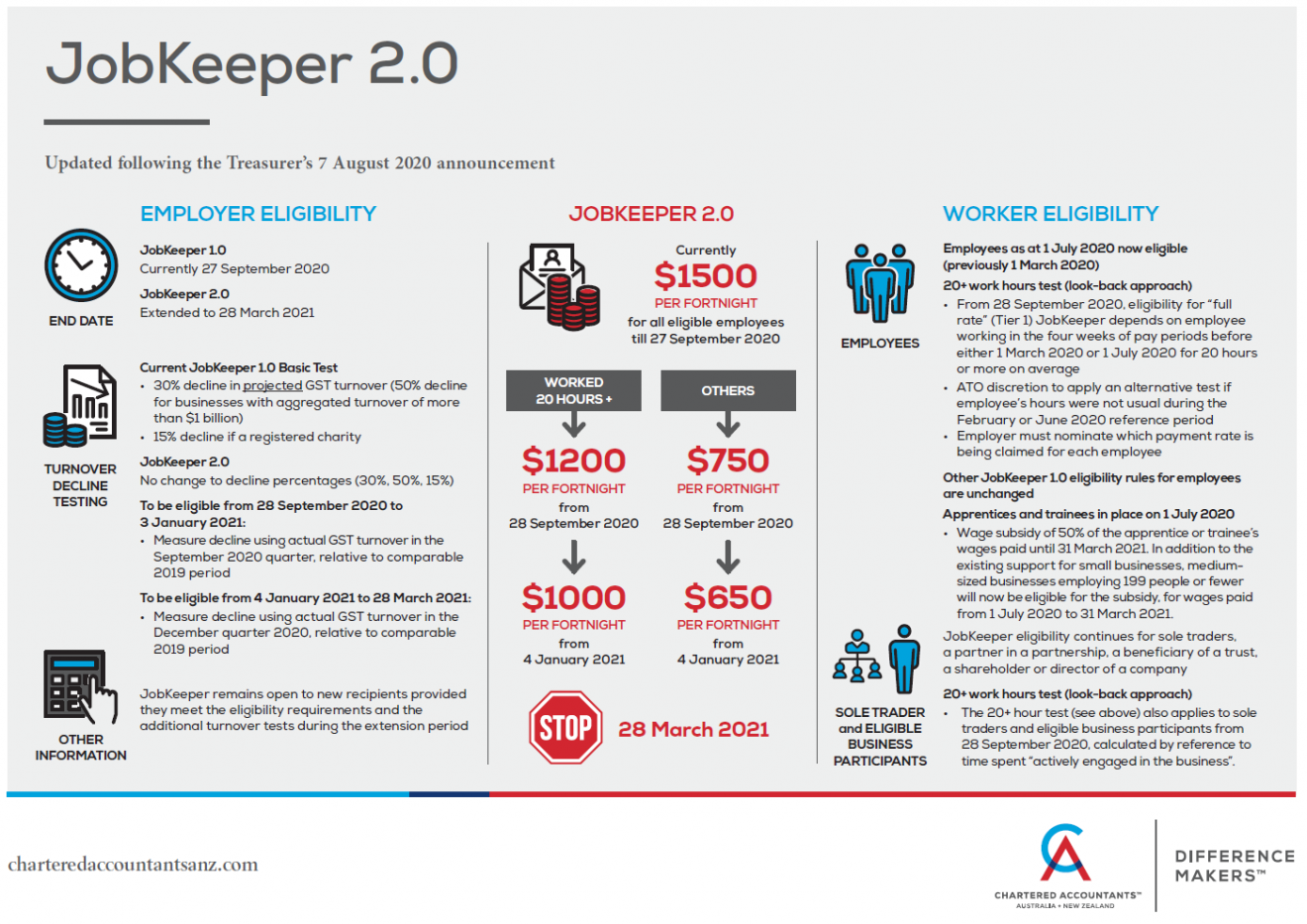 Minimum wage condition will still apply, meaning businesses still won’t be allowed to pay staff a lower hourly rate than they were previously entitled to.

The reduction in jobkeeper means employers will be required to pay a higher proportion of their wage bills.

Eligibility tests will run along the same turnover criteria as the original Jobkeeper however businesses must demonstrate an actual decline in revenue against a comparable period rather than through forecasts.

Employers must also demonstrate a minimum 30% decline in turnover for the September quarterto be eligible for JobKeeper payments covering the December quarter.

This eligibility criteria will be reassessed again across the December quarter for an employer to remain eligible for JobKeeper payments through to March 28, 2021.

About 960,000 businesses are currently enrolled in the JobKeeper program, covering about 3.5 million workers. This number is expected to decrease substantially once new eligibility tests are applied.

In Western Australia most businesses except in certain travel, hospitality and entertainment sectors are returning to pre-covid activity and fewer businesses will be eligible.

Treasury predicts 1.4 million people in Australia will be eligible for the payments in the December quarter and 1 million for the March quarter.

Treasurer Josh Frydenberg said the scheme is expected to cost an estimated $86 billion, instead of the $70 billion previously earmarked and well short of the $130 billion amount first suggested by the Federal government which was found to be an error in calculations.

The JobSeeker supplement will continue for another three months but it will fall from $550 to $250 a fortnight. That means those on the program will receive $815 a fortnight after September 2020.

The revised JobSeeker program will also increase the income-free threshold to $300. That means recipients can earn $300 per fortnight before facing a reduction in their payment.

At the end of September, the government will reintroduce the assets test to determine eligibility for those payments.

From August 4th, those on JobSeeker will be required to connect with employment services and search for jobs at least four times a month, with penalties for those who refuse a role.

The Prime Minister has not ruled out further extensions and says the scheme will be reviewed again before December.

As always, please get in touch with us if you have any questions.