We regularly try to explain to clients the concept of a franked dividend – what are they, why do they matter, what does it mean for your tax and how can they work to your benefit. Some understand franking credits, some nod wisely but still feel confused, and some dream about doing something else, anything else apart from tax. We get that the concept is a challenge, so we’ll try to describe franking credits step by step in simple terms.

Investors in companies receive dividends that usually include Franking Credits. But what are they, who gets them and how do they impact your tax bill?

Australian companies pay tax at the corporate tax rate, which is 25% or 30% depending on a range of factors (the complications of a base rate entity for company tax purposes are many, but they mainly come down to whether the company is earning active / business income and pays tax and franking credits at 25% or passive / investment income paying tax and franking credits at 30%).

When you receive dividends as a company shareholder you report those dividends in your tax return as taxable income and then pay tax on your dividend income. The issue is that tax is paid by the company and then a shareholder also pays tax on dividends. This is known as double-dipping or double taxation.

Franking credits (also known as ‘imputation credits’) are intended to resolve this. Franking credits acknowledge that company tax has already been paid on your dividend earnings and give you an equivalent credit that you can apply to your final personal tax bill. Dividends which have had franking credits applied to them are called ‘franked dividends’.

Confused? Here’s an example which hopefully clears things up.

Let’s say you’re a shareholder of an Australian company and you’ve received a fully franked $70 dividend. On the statement the company sends you, it notes that there is a franking credit of $30, which represents tax already paid by the company. Before that tax was applied, the dividend would have been $100.

At tax time, you declare the whole $100 as taxable income (yes, even though you only received $70 in cash). But you receive a credit for the $30 of tax paid by the company, before paying tax at your own marginal tax rate. If you’re a low income earner, or a super fund in pension fund, you might get all $30 back. If you’re in a high tax bracket, you will end up owing more tax because your personal tax rate (say 47%) is higher than the company tax rate of 30%. This is why accountants like to manage the timing and recipient of dividends so they are paid when the recipient has a low marginal tax rate.

The point is, franking credits are designed to provide a system to stop being taxed twice on money you’ve earned through company dividends. It’s has some more complications than what we’ve described, but that’s the general gist.

Maybe you prefer to see things visually so the following graphics may help:

The company earned $100, paid tax of $30 and declares a fully franked dividend to a shareholder. 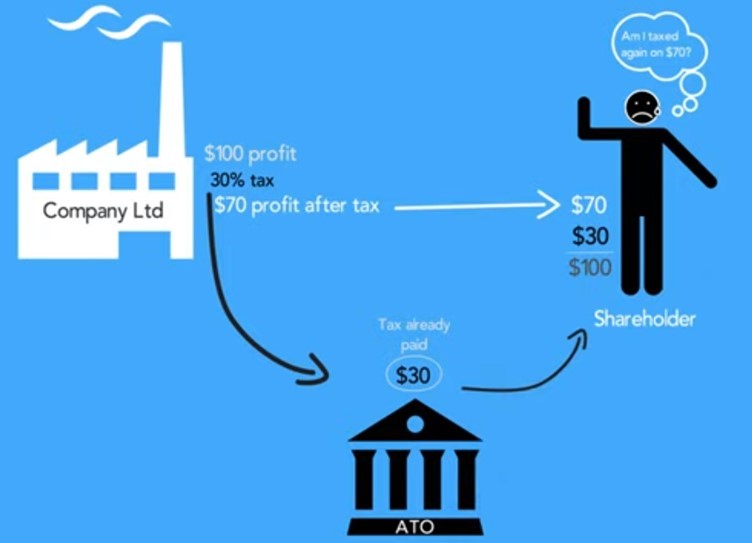 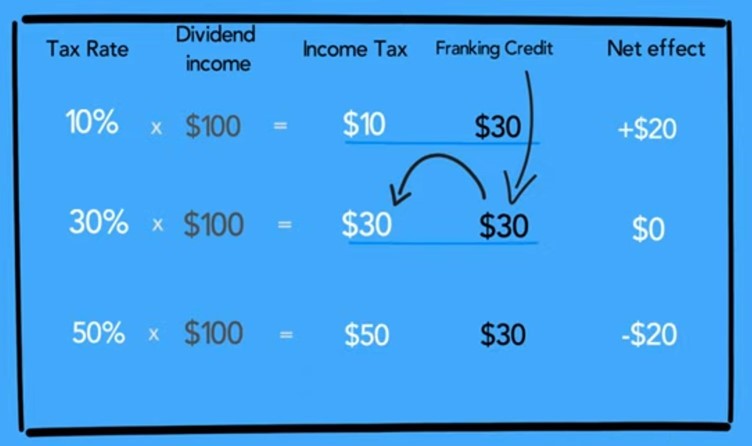 The table below shows the numbers in detail, with a view of both 25% and 30% company tax rates. This is the same as the explanations provided above, just in a different form. You will see that for an individual taxpayer, the company tax rate makes no difference to the amount of tax payable on the same company profit:

Ideally your dividend income is received and allocated in line with your personal income and tax deduction position in each year. Or we use business structures such as family trusts, superannuation and bucket companies with the aim that the Taxpayer (that is, you, your partner or a related business entity) receives dividends at a time or in an entity that has a lower tax rate.

One example is you expect to earn a high income for a few years and then you are planning to retire and will earn a lower income in future. You could receive franked dividends now and pay 47% tax, or by deferring franked dividend income until after your retirement you will have a lower your tax bill both now and in future so more of your hard earned money stays with your rather than being paid in tax.

It is our job to deal with the intricacies of tax rates and franking credits, however when you understand the concepts we are better able to help you succeed. If you need advice we are here to help.