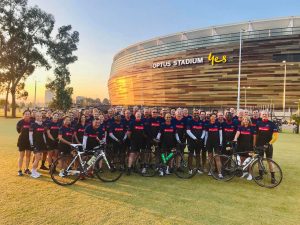 Simon attained a position on the honour roll whereby individual entrants committed to raising more than $4000 for Harry Perkins institute instead of the minimum required entry of $2500 funds raised.

We are so grateful to all who donated and helped Simon reach his goal.

“Being part of a community for a cause brings its own rewards,”Director Simon Terry said. “One week later and we are both still smiling.”

Together Team Woodside ran a series of charity fundraisers including a sausage sizzle at Bunnings, a cycling movie night, raffles, morning teas and more.

“A good event becomes a great event when volunteers, the community and participants join together in a shared positive spirit.

This was a great event and we’re likely to be back next year,” Simon said.

Team Woodside raised a total of $343,348 for Harry Perkins institute of Cancer research.

The ride began at dawn on Saturday 26 October from Optus Stadium with an 100km ride through quiet rural roads near South West Highway before ending in Mandurah.

Honour roll achievers could find their dedicated kilometre sign along the route and stop for a photo opportunity.

The afternoon and evening included a hard earned coffee, lunch and a massage, followed by a relaxing afternoon beer and  dinner and camping overnight for some well earned rest.

On Sunday riders shook out their sore muscles and mounted again to make the 100km return journey into a strong, hot headwind.  The homeward stretch up the coast is always satisfying but more so knowing the ride this year raised $4.8 million dollars for Cancer Research.